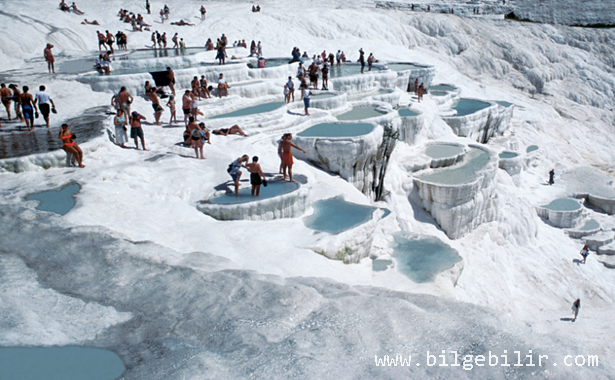 Pamukkale is a natural site in Denizli Province in southwestern Turkey. Pamukkale is one of Turkey’s top attractions and a precious in the world with its cotton-look terraces.

What is the meaning of Pamukkale: Pamukkale; meaning ”cotton castle” in Turkish.

One of Turkey’s most famous landmarks. Pamukkale is wonderful place. Pamukkale has a surreal natural wonder that is a must-do on your Turkish travels. Rippling out in a series of semi-circular travertines, this pure-white mountain makes for some bizarrely beautiful photographic opportunities set as it is among green farming fields. Up on the summit lie the remains of the Roman spa town of Hierapolis with the renowned hot spring pools where you can do as the Roman’s did and bathe away your aches and pains.

Hierapolis City Ruins: İf you are in Pamukkale you must frequently visit Hierapolis.Tourists and locals visit Pamukkale and Hierapolis frequently not only for its extraordinary look and its ancient history but also for wellness.

Hierapolis Theatre: The spectacular Roman theatre, capable of seating more than 12,000 spectators, built during the reigns of the Roman Emperors Hadrian and Septimus Severus,

Laodikeia: Laodikeia, also known as Laodicea, was an Ancient Greek then Roman city. Laodikeia was once home to Cicero. Laodikeia is Roman commercial centre. Laodikeia was a bustling city of industry, medicine and trade. As Christianity began to take over from the earlier pagan religions, a large population of Christians and Jews lived in Laodikeia. The ruins of Laodikeia are highly photogenic and there’s an interesting mix of remnants from the temples and theatres of early Roman settlement to the later Christian era.

Çivril: Çivril is a town and district of Denizli Province in the inner Aegean region of Turkey.

Karahayıt Hot Springs: Karahayıt is the village north of Pamukkale. Karahayıt was once known for its rust-red hot mineral waters, filled with iron and calcium. These scorching mineral-rich hot springs (hot springs temperatures up to 55 C in Karahayıt ) 5 km between Karahayıt and Pamukkale. 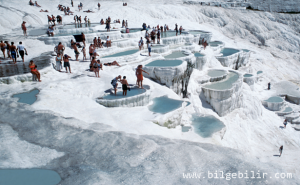 Kolossai: Kolossai or Colossae now called Honaz. The scanty remains of the once great Phrygian city of Kolossai lie near the Lykos River, 20 km east of Denizli.

Sarayköy: Sarayköy is a town and district of Denizli Province in Turkey. Sarayköy is 20 km west of the city of Denizli. The town of Sarayköy, at the western edge of the Hierapolis valley, is probably old Karura (or Kyorara), which lay on the border between Phrygia and Cara.